Menu
GET A QUOTE

Your Solution for Medical Heaters

Equipment that is designed for use in a medical environment must perform to very strict safety standards.  Systems that require electric heat – such as for patient warming or blood dialysis – have critical requirements in electrical safety to prevent injury to the patient or the attendants during use.  This article discusses how electric heaters such as cartridge heaters, high watt density cartridge heaters or swaged cartridge heaters can have serious safety implications in medical equipment if not designed correctly to be a medical safe cartridge heater.

One of the electrical safety requirements is having a very low threshold for leakage current.  Leakage is defined as the electrical current that is allowed to pass through an equipment housing to earth ground.  The standards are established by the allowable current that could pass through a heart before ventricular fibrillation occurs.  Depending on the use of the equipment the leakage limit is adjusted based on risk.

Another aspect of safety is that very precise control of heat is also necessary to maintain to an exact temperature.  An example of a tightly controlled heating requirement would be during dialysis treatment the blood temperature range is 35-37C, with a most effective range to prevent rising core body temperature of 34-35C.

So where does “leakage” come from?

Leakage is not just an old person problem; it is an electrical problem too.

No electric insulator is perfect, and no electrical circuit is perfect either.  Every connection in a circuit has impedance which resists the flow of current through it.  In a normal circuit there are three paths that current will take – Phase (Line), Neutral and Ground.  It’s important to always note that when you touch a piece of equipment your body becomes part of the circuit with a path to earth ground.

So, leakage is electrical current leaving a product in an unintended circuit like to earth ground.

Why do heaters have leakage?

Let’s make sure we are clear what leakage really is as sometimes it is confused with other electrical conditions.  There are two electrical terms we must acknowledge – Capacitance and Leakage.  These are different from each other.

There is a third topic of Induced Voltage that merits a brief conversation.  This is not leakage, but it’s commonly confused with it.  When a customer uses a Voltmeter between the case of an ungrounded heater to earth ground they might see a voltage number referenced.  Since cartridge heaters utilize a wound wire core suspended inside the tube, the magnetic field on this core will induce the electrons in the outer tube to become excited.  This is how transformers are made.  Since there is a very low iron content, and the dielectric gap is high the actual real current (measured in mA) is very low.  So, while the measurement can be alarming – in terms of safety the product is still safe.

Moving back to Capacitance and Leakage – the dielectric insulation we use is made from MgO.  MgO is several things.

Capacitance in cartridge heaters is why the Underwriters Laboratory UL499 standard is based on 100mA trip current.  In normal heater operation the actual leakage to ground can be expected to be much lower than this as the MgO is dry, has been charged and stable.  Industry standard safety testing of the heater must consider the combined charge current plus leakage that a unenergized heater will show on startup.  Since the charging current is short duration, we can refer to it as inrush current.

Inrush current can be illustrated as such:

Many medical equipment manufacturers must use a GFCI (Ground Fault Current Interrupter) device as protection in the circuit from excessive leakage to ground.  GFCI devices however make no allowance for this initial inrush current.  Since its not returned on the neutral phase the GFCI assumes the heater is unsafe and interrupts the circuit.  And since the device cannot allow for “unsafe” condition for any period of time they are designed to trip immediately.  In a true leakage test you will see the current spike then drop to the actual leakage as the MgO is stabilized and you start measuring true leakage (Figure 1).

Leakage current to earth ground through the insulation material is influenced by:

As noted before leakage from heaters is dependent on the temperature the insulation within the heater is operating at.  As the MgO gets hotter the electrical isolation will drop allowing more current to pass to ground.  Figure 2 shows an example of leakage current change as the heaters increase in temperature over 5 different heaters.

Since MgO has a high affinity for moisture, storage of the heater will allow for humidity to weep into the insulation over time and increase the leakage current to ground.  Some control systems offer soft start features that help dry the MgO at startup before full power is applied but safety systems like GFCI’s will prevent the heater from even reaching drying temperature before the protection is tripped.  Manufactures of heating elements have developed seal options to try to protect the storage life and package the heaters in special bags with dry packs to protect them during shipment and storage.  Of course, this does not help when the heater is installed in a machine as its removed from that packaging.

Any organic contamination in the insulation is detrimental to the insulation property – not only from a leakage concern but also from product reliability and life.  MgO can be sourced in a few ways that have varying levels of purity, and processing during assembly is critical to getting the right control for the final heater.  Some designs coat the sand with an organic to encapsulate the MgO particle which can cause reliability issues of the heater at higher temperatures and over time.

What else is working against me?

Equipment used in medical applications share a couple of risk factors that typical electric heaters are prone to – contamination and storage.

While every effort is made to prevent liquids from coming in direct contact with the electric heaters though smart equipment design, the one thing that is impossible to prevent is the absorption of atmospheric humidity into the heater over time.  Liquid acts differently than humidity to seal materials.

Typical seal materials used in heaters are Silicone, Epoxy, or Lava.  Each have their strengths and weaknesses – but regardless of what type of sealant is used in the end of the heater, stranded lead wires will wick the humidity through capillary action past the seal and into the heater.

Transport of the heater is a concern as international shipping exposes the heater to changes in atmospheric pressure as well as changes in humidity in which dry packs have limited impact.

Thermal expansion of the heater with the seal is another issue that must be carefully considered for seal integrity while the heater is being used.

And lastly as the equipment is stored waiting for use, the heaters will breathe humidity causing an unsafe starting condition for the equipment.

What can be done?

Nexthermal has developed a unique solution assuring the highest protection for heaters used in medical applications, and the lowest electrical leakage in the industry.

For example, we recently worked with a medical device manufacturer to improve the protection of their equipment.  As part of the test criteria from the customer the heater had to be exposed for 48 hours in a humidity chamber at 40C and 93%Rh, then tested to pass 2mA at 2000VAC.  Daunting enough – but these also had to shipped to the opposite side of the world with the same performance as it was when packaged.  Bonus points if the heaters were no longer needed to be packaged in expensive metalized and vacuum sealed packages for shipment.

Nexthermal started with developing a unique manufacturing process to dry and seal the heater in one controlled stage.  This allowed a consistent level of process control that assured a solid starting point. 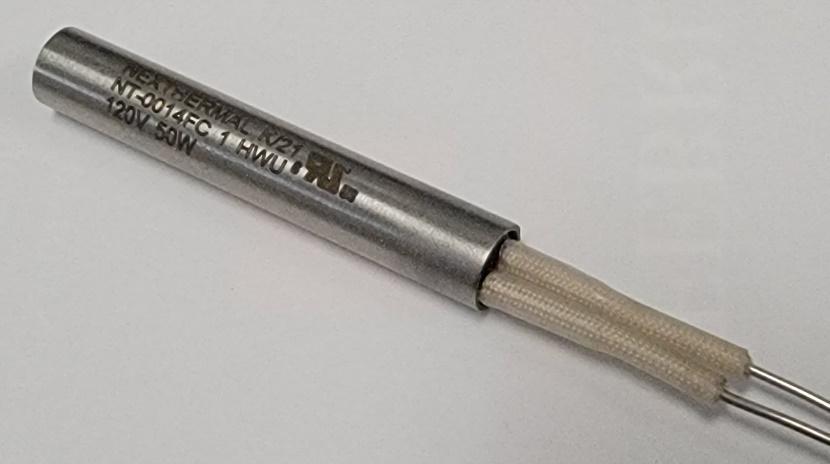 We worked with material scientists to help guide us on the best solution for thermal expansion during operation, so the customers protection remained during use of the equipment.

The resulting performance was so good that we no longer needed to ship heaters in an expensive protective packaging.

The result we were able to consistently reach a tested result of leakage current to less than 0.003mA tested at 2000VAC in delivered product to the customer, against their expectation of 2.0mA and well below the industry standard of 0.5mA for portable equipment.

Contact Nexthermal today to learn how we can help you succeed in this difficult application!

Translate to another language

Any cookies that may not be particularly necessary for the website to function and is used specifically to collect user personal data via analytics, ads, other embedded contents are termed as non-necessary cookies. It is mandatory to procure user consent prior to running these cookies on your website.